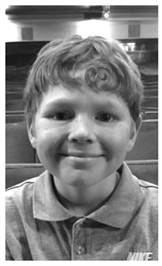 your eyes peeled for our star in the making, Bradley Mayfield, who has been chosen to play the role of Michael in Billy Elliot the Musical at the Victoria Palace Theatre in London’s West End!

Bradley joined us just a year ago and has been working very hard on his singing, dancing & acting skills ever since. He began training for the role of Michael earlier this year, and will be making his debut as Billy’s best friend Michael tonight.